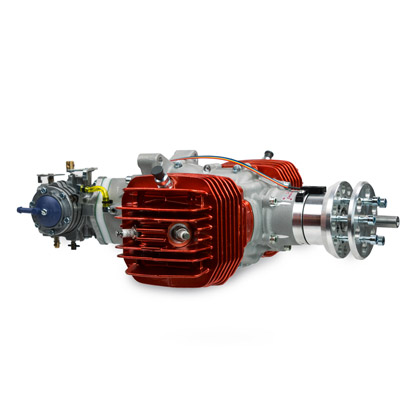 The 3W-275Xi B2R TS CS’s ruggedness leaves nothing to be desired. With the generously dimensioned ball and needle bearings, as well as the reinforced crankshaft, the engine has a very long service life.
A static thrust of up to 55 kg can be achieved with the matched 3W muffler system. The engine is thus suitable for a broad variety of models and distinguishes itself through its reliability, durability, and power. As a TS CS version, the engine unites all of the performance parameters of the TS and CS versions.
The TS version (twin spark) impresses with a lower idle and quieter running behaviour. In addition, the boxer engines obtain even greater reliability this way. When one ignition fails, the second one working independently ensures that the engine continues to run.
The 3W Competition series (CS version) distinguishes itself through greater performance, more rapid response behaviour, and high torque. The engine thereby achieves a high standard of per-formance. Transfer ports in the cylinder and crankcase are modified.
The microprocessor-controlled ignition enables simple engine control. The programmed ignition curve is exactly matched to the engines and guarantees good running characteristics in all rotation-al-speed ranges. The standard ignition can be operated with a voltage of 6 V up to 8.4 V (2-cell LiPo).